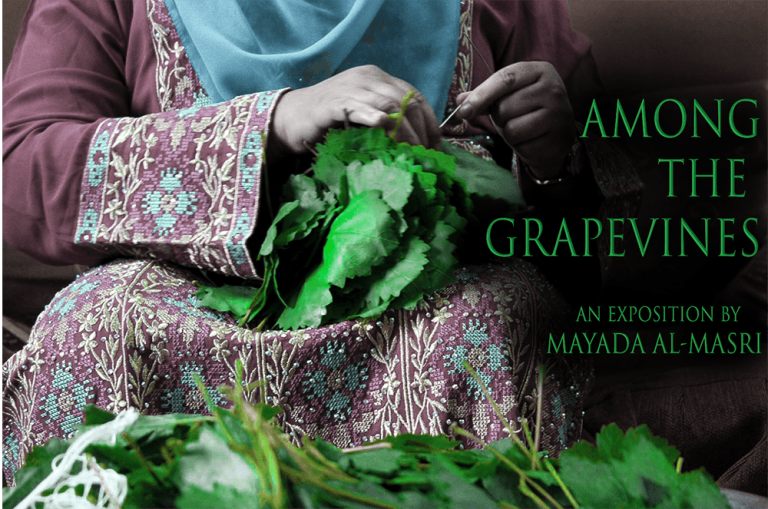 Go to the virtual exhibition

Some paintings from the Exhibition

This heading takes us back our childhood, when we would flee the summer heat and gather together under the shade the grapevines afforded. This shade, which embraces the childhood memories of Artist Mayyada Masry, continues to serve as a nostalgic symbol for those happy childhood days. The memories also serve as inspiration for Masry’s works. Of course, the personal symbol serves at the same time as a collective symbol of Palestinian identity.

Masry utilizes vine leaves, used to prepare a tasty dish, adopting them in her artistic work as a base hidden under colors. In using vine leaves as a base for works decorated with threads and words, she reinvigorates her memories. The vine leaf hovers between presence and absence1 as though transformed into the earth/the source of life.

As Artist Mayyada Masry confided in me during our series of ongoing sessions, she stands in awe of vine leaves, an ethnic dish she prepares by herself; they still excite her. Like the dish itself, the preparation for which requires an investment of special efforts, expertise and dedication, the artist’s works are the result of a complex, multi-stage technique.

She has researched the raw materials in her laboratory – her studio – examining whether vine leaves and fig leaves could be used appropriately as a background and base for her works. After carrying out many experiments, as part of an ongoing process of trial and error, she concluded that vine leaves spoke to her best, since they are soft and malleable and, as opposed to fig leaves, it is easy to fold and roll them. In addition, as the artist states: “Vine leaves are close in form to the shape of a pentagonal star.”

Masry experimented in her studio with coloring, tearing and drying vine leaves, and with regenerating them too, a process resembling deconstruction and reconstruction, by means of which she hoped to formulate a new experience with an innovative identity and indications. Her work includes vine leaves decorated with embroidery thread and words – three symbols that undergo a process of simplification. The artist isolates a single Palestinian embroidery stitch and enlarges it, and by this act it becomes something in its own right – a painting on the spectacularly colored background to which it has been applied.
In Akra (“Read” in English), a work named after the opening word of the Al-Alaq surah, the word itself is transformed into a philosophical message, calling on the viewer to study and examine the work. Nevertheless, we can also interpret it as a call to relate to the political situation.In this context, the call is not for this to be implemented by the physical, biological eye, but by the heart’s eye, by wisdom, as defined by Al-Ghazali (the medieval Muslim theologian and philosopher). In order for the viewer to read the painting, he or she must move closer to it, to be able to see the branches and leaves interwoven in it with color and thread. Only then can the significance hidden behind what is obvious, be revealed, a significance that gives presence to tradition/the past, as well as to the interweaving among language, identity, land and nation.

Other artists – and not just Palestinians – have used vine leaves in their works; Nabil Anani is one case in point. Anani painted a Palestinian woman surrounded by a halo in the shape of a vine branch. In so doing, he added a facet of sanctity to the mythic connection of woman, land and nation.

However, Anani draws vine leaves, he does not use them as a raw material, the way Masry does. The viewer sees each element individually in Anani’s painting – the woman, the vine leaves and the embroidered clothing. In contrast, the elements in Masry’s abstract works cannot be isolated, each one is a symbol, and eliminating any one of them detracts from the work’s very significance.

For more information you can call